What static analysis tools are available for C#?

What tools are there available for static analysis against C# code? I know about FxCop and StyleCop. Are there others? I've run across NStatic before but it's been in development for what seems like forever - it's looking pretty slick from what little I've seen of it, so it would be nice if it would ever see the light of day.

Along these same lines (this is primarily my interest for static analysis), tools for testing code for multithreading issues (deadlocks, race conditions, etc.) also seem a bit scarce. Typemock Racer just popped up so I'll be looking at that. Anything beyond this?

The tool NDepend is quoted as Quality Metric Tools but it is pretty much also a Code violation detection tool. Disclaimer: I am one of the developers of the tool

With NDepend, one can write Code Rule over LINQ Queries (what we call CQLinq). More than 200 CQLinq code rules are proposed by default. The strength of CQLinq is that it is straightforward to write a code rule, and get immediately results. Facilities are proposed to browse matched code elements. For example: 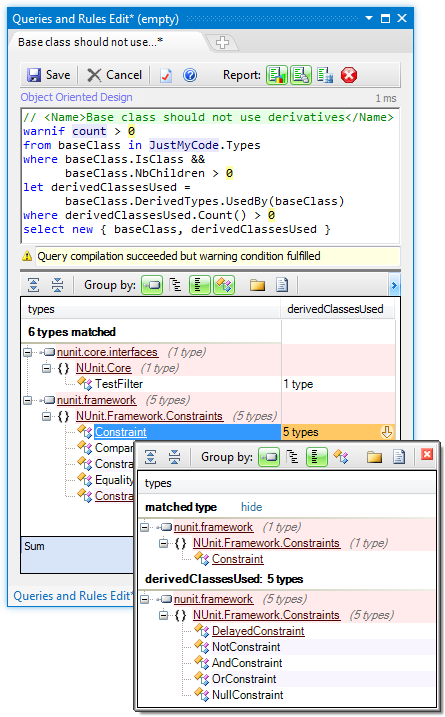 Beside that, NDepend comes with many others static analysis like features. These include:

CAT.NET is a binary code analysis tool that helps identify common variants of certain prevailing vulnerabilities that can give rise to common attack vectors such as Cross-Site Scripting (XSS), SQL Injection and XPath Injection.

I used an early beta and it did seem to turn up a few things worth looking at.

Aside from the excellent list by madgnome, I would add a duplicate code detector that is based off the command line (but is free):

Axivion Bauhaus Suite is a static analysis tool that works with C# (as well as C, C++ and Java).

It provides the following capabilities:

These features can be run on a one-off basis or as part of a Continuous Integration process. Issues can be highlighted on a per project basis or per developer basis when the system is integrated with a source code control system.

Optimyth Software has just launched a static analysis service in the cloud www.checkinginthecloud.com. Just securely upload your code run the analysis and get the results. No hassles.

It supports several languages including C# more info can be found at wwww.optimyth.com

Klocwork has a static analysis tool for C#: http://www.klocwork.com