What is the yield keyword used for in C#?

In the How Can I Expose Only a Fragment of IList<> question one of the answers had the following code snippet:

What does the yield keyword do there? I've seen it referenced in a couple places, and one other question, but I haven't quite figured out what it actually does. I'm used to thinking of yield in the sense of one thread yielding to another, but that doesn't seem relevant here.

This question is tagged with c# yield

The yield keyword actually does quite a lot here.

The function returns an object that implements the IEnumerable<object> interface. If a calling function starts foreaching over this object, the function is called again until it "yields". This is syntactic sugar introduced in C# 2.0. In earlier versions you had to create your own IEnumerable and IEnumerator objects to do stuff like this.

The easiest way understand code like this is to type-in an example, set some breakpoints and see what happens. Try stepping through this example:

When you step through the example, you'll find the first call to Integers() returns 1. The second call returns 2 and the line yield return 1 is not executed again.

Here is a real-life example:

Iteration. It creates a state machine "under the covers" that remembers where you were on each additional cycle of the function and picks up from there.

In order to explain above two points more demonstratively, I have created a simple video you can watch it here

While it's nominally used for easily implementing an iterator pattern, but can be generalized into a state machine. No point in quoting Raymond, the last part also links to other uses (but the example in Entin's blog is esp good, showing how to write async safe code).

At first sight, yield return is a .NET sugar to return an IEnumerable.

Without yield, all the items of the collection are created at once:

The advantage of using yield is that if the function consuming your data simply needs the first item of the collection, the rest of the items won't be created.

The yield operator allows the creation of items as it is demanded. That's a good reason to use it.

yield return is used with enumerators. On each call of yield statement, control is returned to the caller but it ensures that the callee's state is maintained. Due to this, when the caller enumerates the next element, it continues execution in the callee method from statement immediately after the yield statement.

Let us try to understand this with an example. In this example, corresponding to each line I have mentioned the order in which execution flows.

Also, the state is maintained for each enumeration. Suppose, I have another call to Fibs() method then the state will be reset for it.

In practice, it is often desirable to perform the minimum amount of work as needed in order to reduce the resource consumption of an application.

For example, we may have an application that process millions of records from a database. The following benefits can be achieved when we use IEnumerable in a deferred execution pull-based model:

Here is a comparison between build a collection first such as a list compared to using yield.

Note: The entire collection was loaded into memory without even asking for a single item in the list

Console Output
Ready to iterate through the collection.

Note: The collection wasn't executed at all. This is due to the "deferred execution" nature of IEnumerable. Constructing an item will only occur when it is really required.

Nice! Only the first contact was constructed when the client "pulled" the item out of the collection.

Intuitively, the keyword returns a value from the function without leaving it, i.e. in your code example it returns the current item value and then resumes the loop. More formally, it is used by the compiler to generate code for an iterator. Iterators are functions that return IEnumerable objects. The MSDN has several articles about them.

Here is a simple way to understand the concept: The basic idea is, if you want a collection that you can use "foreach" on, but gathering the items into the collection is expensive for some reason (like querying them out of a database), AND you will often not need the entire collection, then you create a function that builds the collection one item at a time and yields it back to the consumer (who can then terminate the collection effort early).

Think of it this way: You go to the meat counter and want to buy a pound of sliced ham. The butcher takes a 10-pound ham to the back, puts it on the slicer machine, slices the whole thing, then brings the pile of slices back to you and measures out a pound of it. (OLD way). With yield, the butcher brings the slicer machine to the counter, and starts slicing and "yielding" each slice onto the scale until it measures 1-pound, then wraps it for you and you're done. The Old Way may be better for the butcher (lets him organize his machinery the way he likes), but the New Way is clearly more efficient in most cases for the consumer.

The yield keyword allows you to create an IEnumerable<T> in the form on an iterator block. This iterator block supports deferred executing and if you are not familiar with the concept it may appear almost magical. However, at the end of the day it is just code that executes without any weird tricks.

An iterator block can be described as syntactic sugar where the compiler generates a state machine that keeps track of how far the enumeration of the enumerable has progressed. To enumerate an enumerable, you often use a foreach loop. However, a foreach loop is also syntactic sugar. So you are two abstractions removed from the real code which is why it initially might be hard to understand how it all works together.

Assume that you have a very simple iterator block:

Real iterator blocks often have conditions and loops but when you check the conditions and unroll the loops they still end up as yield statements interleaved with other code.

To enumerate the iterator block a foreach loop is used:

Here is the output (no surprises here):

As stated above foreach is syntactic sugar:

In an attempt to untangle this I have crated a sequence diagram with the abstractions removed: 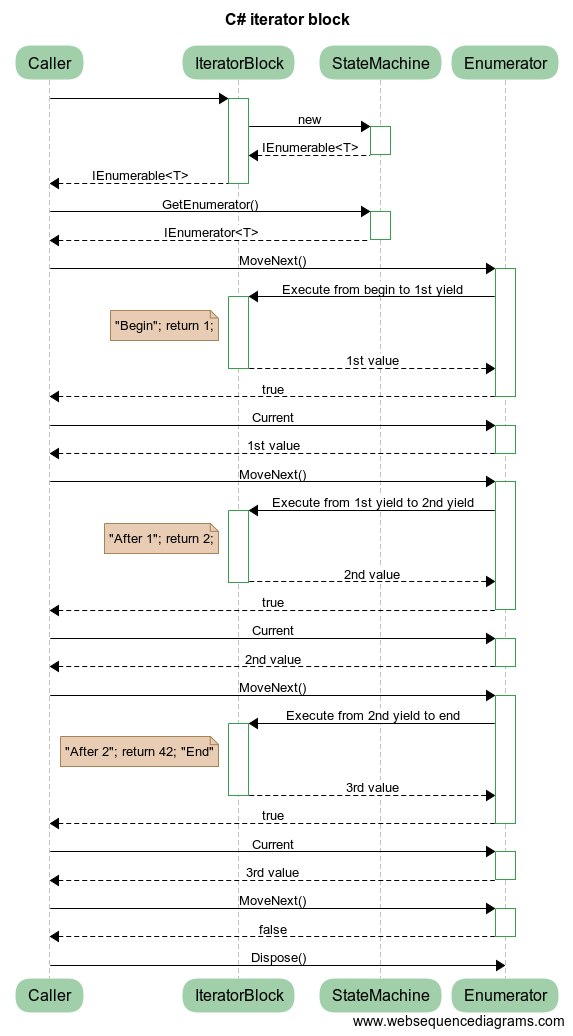 Every time you call your iterator block a new instance of the state machine is created. However, none of your code in the iterator block is executed until enumerator.MoveNext() executes for the first time. This is how deferred executing works. Here is a (rather silly) example:

At this point the iterator has not executed. The Where clause creates a new IEnumerable<T> that wraps the IEnumerable<T> returned by IteratorBlock but this enumerable has yet to be enumerated. This happens when you execute a foreach loop:

If you enumerate the enumerable twice then a new instance of the state machine is created each time and your iterator block will execute the same code twice.

If I understand this correctly, here's how I would phrase this from the perspective of the function implementing IEnumerable with yield.

The C# yield keyword, to put it simply, allows many calls to a body of code, referred to as an iterator, that knows how to return before it's done and, when called again, continues where it left off - i.e. it helps an iterator become transparently stateful per each item in a sequence that the iterator returns in successive calls.

In JavaScript, the same concept is called Generators.

One major point about Yield keyword is Lazy Execution. Now what I mean by Lazy Execution is to execute when needed. A better way to put it is by giving an example

Now when I call both methods.

you will notice listItems will have a 5 items inside it (hover your mouse on listItems while debugging). Whereas yieldItems will just have a reference to the method and not the items. That means it has not executed the process of getting items inside the method. A very efficient a way of getting data only when needed. Actual implementation of yield can seen in ORM like Entity Framework and NHibernate etc.

This link has a simple example

Even simpler examples are here

Notice that yield return won't return from the method. You can even put a WriteLine after the yield return

Notice also that when you use yield, what you are returning is not of the same type as the function. It's of the type of an element within the IEnumerable list.

And to get it to execute you have to call it in a special way.

It's trying to bring in some Ruby Goodness :)
Concept: This is some sample Ruby Code that prints out each element of the array

The Array's each method implementation yields control over to the caller (the 'puts x') with each element of the array neatly presented as x. The caller can then do whatever it needs to do with x.

However .Net doesn't go all the way here.. C# seems to have coupled yield with IEnumerable, in a way forcing you to write a foreach loop in the caller as seen in Mendelt's response. Little less elegant.