What's the difference between struct and class in .NET?

What's the difference between struct and class in .NET?

This question is tagged with .net class struct value-type reference-type

In .NET, there are two categories of types, reference types and value types.

Structs are value types and classes are reference types.

The general difference is that a reference type lives on the heap, and a value type lives inline, that is, wherever it is your variable or field is defined.

A variable containing a reference type contains a pointer, or a reference to somewhere else in memory where the actual value resides.

This has one benefit, to begin with:

Internally, reference types are implemented as pointers, and knowing that, and knowing how variable assignment works, there are other behavioral patterns:

When you declare variables or fields, here's how the two types differ:

A short summary of each:

Both Classes and Structs:

In .NET the struct and class declarations differentiate between reference types and value types.

When you pass round a reference type there is only one actually stored. All the code that accesses the instance is accessing the same one.

When you pass round a value type each one is a copy. All the code is working on its own copy.

This can be shown with an example:

For a class this would be different

Classes can be nothing - the reference can point to a null.

Structs are the actual value - they can be empty but never null. For this reason structs always have a default constructor with no parameters - they need a 'starting value'.

Difference between Structs and Classes:

From Microsoft's Choosing Between Class and Struct ...

As a rule of thumb, the majority of types in a framework should be classes. There are, however, some situations in which the characteristics of a value type make it more appropriate to use structs.

? CONSIDER a struct instead of a class:

X AVOID a struct unless the type has all of the following characteristics:

In addition to all differences described in the other answers:

If you are after a video explaining all the differences, you can check out Part 29 - C# Tutorial - Difference between classes and structs in C#.

Instances of classes are stored on the managed heap. All variables 'containing' an instance are simply a reference to the instance on the heap. Passing an object to a method results in a copy of the reference being passed, not the object itself.

Structures (technically, value types) are stored wherever they are used, much like a primitive type. The contents may be copied by the runtime at any time and without invoking a customised copy-constructor. Passing a value type to a method involves copying the entire value, again without invoking any customisable code.

I ? visualizations, and here I've created a one to show the basic differences between structs and classes. 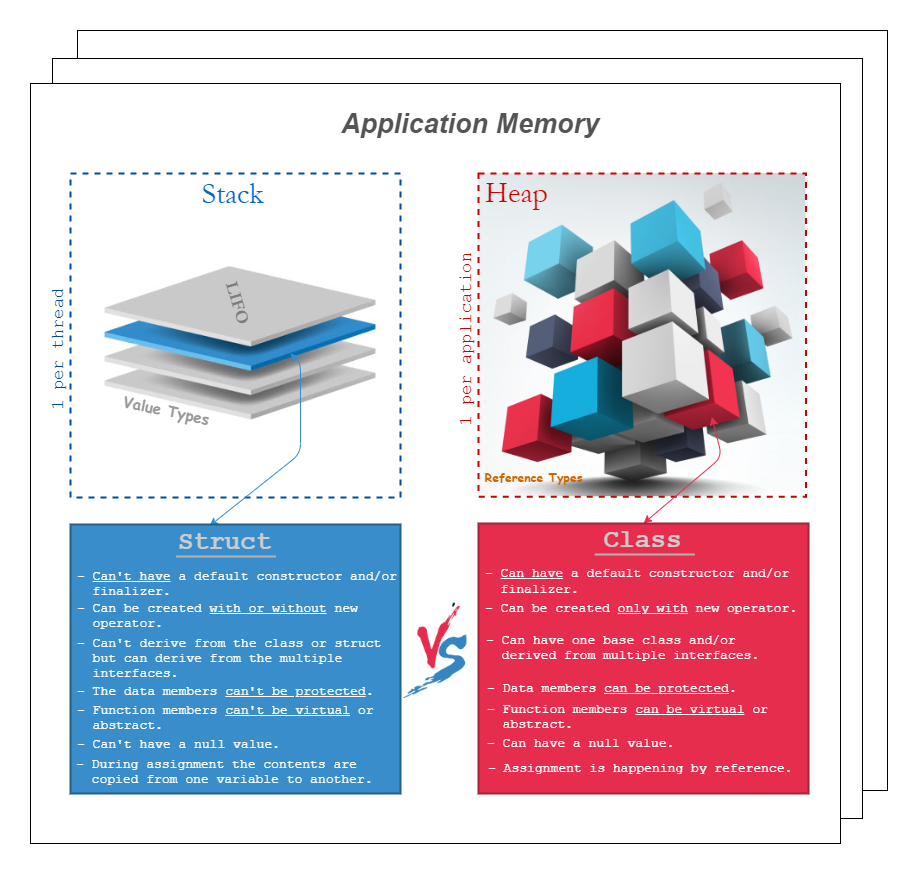 For more information look below:

To add to the other answers, there is one fundamental difference that is worth noting, and that is how the data is stored within arrays as this can have a major effect on performance.

So an array of structs looks like this in memory

With an array of classes, the values you're interested in are not stored within the array, but elsewhere in memory.

For a vast majority of applications this difference doesn't really matter, however, in high performance code this will affect locality of data within memory and have a large impact on the performance of the CPU cache. Using classes when you could/should have used structs will massively increase the number of cache misses on the CPU.

The slowest thing a modern CPU does is not crunching numbers, it's fetching data from memory, and an L1 cache hit is many times faster than reading data from RAM.

Here's some code you can test. On my machine, iterating through the class array takes ~3x longer than the struct array.

A structure doesn't support inheritance, and polymorphism, but a class supports both.

By default, all the struct members are public but class members are by default private in nature.

As a structure is a value type, we can't assign null to a struct object, but it is not the case for a class.

Just to make it complete, there is another difference when using the Equals method, which is inherited by all classes and structures.

Lets's say we have a class and a structure:

and in the Main method, we have 4 objects.

So, structures are suited for numeric-like objects, like points (save x and y coordinates). And classes are suited for others. Even if 2 people have same name, height, weight..., they are still 2 people.

Well, for starters, a struct is passed by value rather than by reference. Structs are good for relatively simple data structures, while classes have a lot more flexibility from an architectural point of view via polymorphism and inheritance.

Others can probably give you more detail than I, but I use structs when the structure that I am going for is simple.

As previously mentioned: Classes are reference type while Structs are value types with all the consequences.

As a thumb of rule Framework Design Guidelines recommends using Structs instead of classes if:

Besides the basic difference of access specifier, and few mentioned above I would like to add some of the major differences including few of the mentioned above with a code sample with output, which will give a more clear idea of the reference and value

Initial value of Struct Object is: 10

Inside Struct Method Inside Method value of Struct Object is: 20

After Method call value of Struct Object is: 10

Initial value of Class Object is: 10

Inside Class Method Inside Method value of Class Object is: 20

After Method call value of Class Object is: 20

Here you can clearly see the difference between call by value and call by reference.

There is one interesting case of "class vs struct" puzzle - situation when you need to return several results from the method: choose which to use. If you know the ValueTuple story - you know that ValueTuple (struct) was added because it should be more effective then Tuple (class). But what does it mean in numbers? Two tests: one is struct/class that have 2 fields, other with struct/class that have 8 fields (with dimension more then 4 - class should become more effective then struct in terms processor ticks, but of course GC load also should be considered).

This is true, however also note that as of .NET 2 structs support a Nullable version and C# supplies some syntactic sugar to make it easier to use.

Every variable or field of a primitive value type or structure type holds a unique instance of that type, including all its fields (public and private). By contrast, variables or fields of reference types may hold null, or may refer to an object, stored elsewhere, to which any number of other references may also exist. The fields of a struct will be stored in the same place as the variable or field of that structure type, which may be either on the stack or may be part of another heap object.

It's important to note that in some languages like C++, the semantic behavior of a type is independent of how it is stored, but that isn't true of .NET. If a type implements mutable value semantics, copying one variable of that type to another copies the properties of the first to another instance, referred to by the second, and using a member of the second to mutate it will cause that second instance to be changed, but not the first. If a type implements mutable reference semantics, copying one variable to another and using a member of the second to mutate the object will affect the object referred to by the first variable; types with immutable semantics do not allow mutation, so it doesn't matter semantically whether copying creates a new instance or creates another reference to the first.