How can we generate getters and setters in Visual Studio?

By "generate", I mean auto-generation of the code necessary for a particular selected (set of) variable(s).

But any more explicit explication or comment on good practice is welcome.

This question is tagged with c# visual-studio setter getter

Rather than using Ctrl + K, X you can also just type prop and then hit Tab twice.

Visual Studio also has a feature that will generate a Property from a private variable.

If you right-click on a variable, in the context menu that pops up, click on the "Refactor" item, and then choose Encapsulate Field.... This will create a getter/setter property for a variable.

I'm not too big a fan of this technique as it is a little bit awkward to use if you have to create a lot of getters/setters, and it puts the property directly below the private field, which bugs me, because I usually have all of my private fields grouped together, and this Visual Studio feature breaks my class' formatting.

I use Visual Studio 2013 Professional.

You also place the cursor for choosing a property. Use menu Edit → Refactor → Encapsulate Field...

By generate, do you mean auto-generate? If that's not what you mean:

Visual Studio 2008 has the easiest implementation for this:

In the background this creates an implied instance variable to which your property is stored and retrieved.

However if you want to put in more logic in your Properties, you will have to have an instance variable for it:

You can also use "propfull" and hit TAB twice.

The variable and property with get and set will be generated.

If you are using Visual Studio 2005 and up, you can create a setter/getter real fast using the insert snippet command.

If you're using ReSharper, go into the ReSharper menu → Code → Generate...

(Or hit Alt + Ins inside the surrounding class), and you'll get all the options for generating getters and/or setters you can think of :-)

A dialog will appear showing you the preview of the changes that are going to be done to your code. If everything looks good (which it mostly will), press OK.

It will generate a property and a variable.

Type keyword propfull in the editor, followed by two TABs. It will generate code like:

Video demonstrating the use of snippet 'propfull' (among other things), at 4 min 11 secs.

I created my own snippet that only adds {get; set;}. I made it just because I find prop → Tab to be clunky.

With this, you type your PropType and PropName manually, then type get → Tab, and it will add the get set. It's nothing magical, but since I tend to type my access modifier first anyway, I may as well finish out the name and type.

In Visual Studio Community Edition 2015 you can select all the fields you want and then press Ctrl + . to automatically generate the properties.

You have to choose if you want to use the property instead of the field or not.

In addition to the 'prop' snippet and auto-properties, there is a refactor option to let you select an existing field and expose it via a property (right click on the field → Refactor → Encapsulate Field...).

Also, if you don't like the 'prop' implementation, you can create your own snippets. Additionally, a third-party refactoring tool like ReSharper will give you even more features and make it easier to create more advanced snippets. I'd recommend ReSharper if you can afford it.

I don't have Visual Studio installed on my machine anymore (and I'm using Linux), but I do remember that there was an wizard hidden somewhere inside one of the menus that gave access to a class builder.

With this wizard, you could define all your classes' details, including methods and attributes. If I remember well, there was an option through which you could ask Visual Studio to create the setters and getters automatically for you.

I know it's quite vague, but check it out and you might find it. 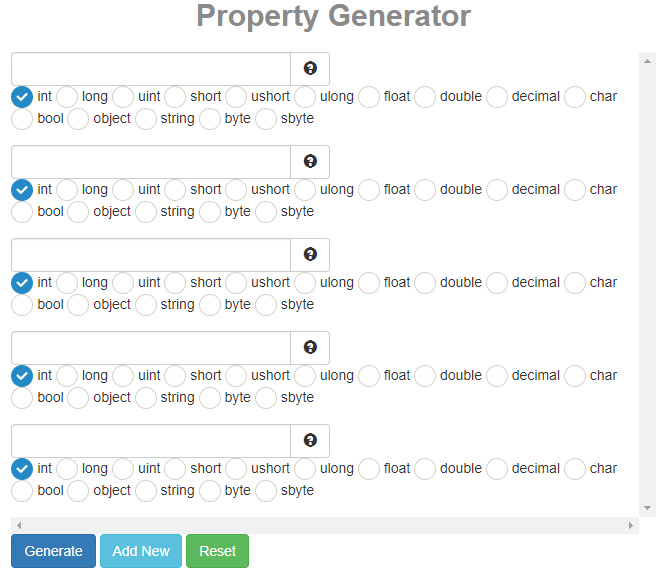 After this, just select your variable and right click. Go to Command palette...

And type getter ... It will suggest generate get and set methods. Click on this...

After declaring variables, you will get the getters and setters in the generated code.